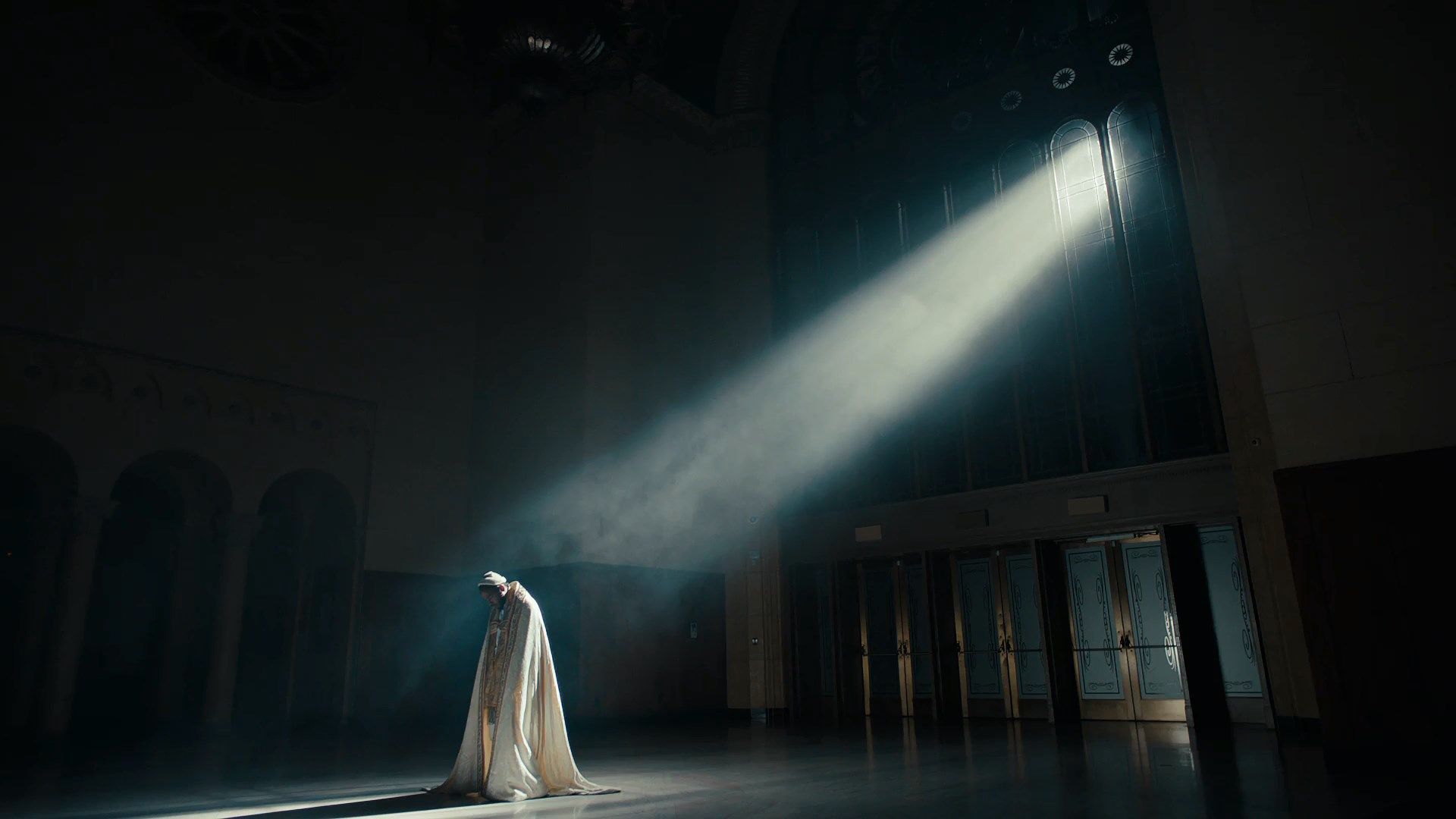 I, like many, am struggling with reckoning with the world and with the Church in the wake of another round of unnecessary death in America. For a long time, I've loved Kendrick for both his other-worldly artistry and for his religious vision. I am finally writing out my thoughts on his work to cope with the world.

If you end up reading this and you are coming from mainstream Christianity or Catholicism and don't typically listen to rap, I suggest starting by listening to the album in its completeness and following along with the annottated lyrics on Genius. Don't attempt it if you aren't willing to commit to at least two listens. After that, read on.

Kendrick Lamar's 2017 magnum opus DAMN. is a critical favorite among popular media figures, but something that is often missing from mainstream coverage of the album is an appreciation for the impressive theological heft of this piece of art, which I think deserves to be studied in decades and centuries as a masterwork.

Underpinning my understanding of Kendrick Lamar's work is an appreciation for the fact that Kendrick is, obviously, a devout Christian, and particularly that he, in good kid, m.A.A.d city and DAMN. are strictly and explicitly albums about religion, while To Pimp a Butterfly and Section.80 are secular albums. Of course, superficially, this is a bit of a bold claim, but I think a close analysis leaves no question about this fact. In this post, I will look in particular at DAMN.

Consider DAMN. In order to understand the religious content of the album, as is the case with good kid, m.A.A.d city, you must understand Kendrick's use of a bookending frame. The first track of DAMN., "BLOOD.", begins with the Bēkon theme: "Is it wickedness? / Is it weakness? / You decide / Are we gonna live or die?". This goes straight into a Kendrick spoken word:

So I was takin' a walk the other day
And I seen a woman—a blind woman
Pacin' up and down the sidewalk
She seemed to be a bit frustrated
As if she had dropped somethin' and
Havin' a hard time findin' it
So after watchin' her struggle for a while
I decide to go over and lend a helping hand, you know?
"Hello ma'am, can I be of any assistance?
It seems to me that you have lost something
I would like to help you find it."
She replied: "Oh yes, you have lost something
You've lost… your life."

Next, a gunshot; no music yet, but you've now been dropped into the narrative frame in which the album to take place. In this frame, a fictional version of Kendrick[1], the first-person narrator of much the forthcoming album, shot and bleeding out, has his life flash before his eyes.

The blind woman is the first flash of Kendrick's generational genius, and of the depth of his artistic and historical references; the blind woman is a reference to the Roman godess of Justice. Kung-Fu Kenny is shot by Lady Justice herself; she weighs him and the balance and damns him, with the bullet no less, which is a recurring motif in Kendrick's art. Some theorize that Kendrick's work is an attempt to atone for his sins, and his own work alludes to this possibility: "I could never right my wrongs ‘less I write it down for real" on GKMC's "Poetic justice" and "I rap, I black on track so rest assured / My rights, my wrongs; I write 'til I'm right with God" on TPAB's "Alright". In fact, a common reading of his work suggests that the sins for which he seeks to atone may themselves involve a gun.

In classic Lamar fashion, Lady Justice doesn't exclusively act as a acknowledgement of Kendrick's own unworthiness, but also of the American state face-to-face with Black America: Justice herself is a frequent icon of the American criminal justice, featured, among other places, presiding famously over the original chambers of the Supreme Court of the United States, in a Carlo Franzoni work. In that work, particularly, Lady Justice is unblindfolded. Where Kendrick's Justice knows what she is doing and she offers the steely, unfeeling, and vengeant justice of the world, and perhaps the one that he is claiming he deserves, he simultaneously alludes to the false justice that America offers to many of her Black citizens, one that is blind- to its own ignorance- rather than blindfolded. This duality will play an important work as the album plays out.

"DNA.": an American coming of age

If DAMN. is the story of life flashing before a version of Kenny's eyes, then "DNA." sets the tone for the world in which he lived. The incredible music video presents song as a sort of duality, between the American ideal of straight-laced success and the often violent path to success on neglected American streets; Kendrick, here, weaves them together: Kung-Fu Kenny and Don Cheadle's investigator are both rapping Kendrick's lines.

For Kendrick, in the video and in America, there might be two stories, but told in one voice. And ultimately, Don Cheadle's investigator succumbs to Kenny's dim mak. The rapper who would go on to win a Pulitzer for this album had just been set free by Cheadle's investigator just before delivering the fatal touch to his captor, his mirror image. For Kendrick it seems, freedom comes from rejecting the duality of his American upbringing, but in recognizing its totality, embracing it authentically, and reckoning with it honestly; but what does this have to do with a Catholic vision of redemption? Sin, and our reckoning with it.

If "DNA." is a coming of age, then "YAH.", I contend, represents the very beginning of a religious awakening. In Return of the King, as Sam Gamgee and Frodo Baggins camp deep in Mordor, in the shadow of a grave manifestation of evil, the following happens:

There, peeping among the cloud-wrack above a dark tor high up in the
mountains, Sam saw a white star twinkle for a while. The beauty of it
smote his heart, as he looked up out of the forsaken land, and hope
returned to him. For like a shaft, clear and cold, the thought pierced
him that in the end the Shadow was only a small and passing thing: there
was light and high beauty for ever beyond its reach.

G.K. Chesterton, the English Catholic writer, described God's call to holiness through one of his characters: "I caught him, with an unseen hook and an invisible line which is long enough to let him wander to the ends of the world, and still to bring him back with a twitch upon the thread.” This idea would be used to title the second part of Evelyn Waugh's Brideshead Revisited, too: "A Twitch upon the Thread". In "YAH.", our protagonist Kung-Fu Kenny feels what Luigi Giussani, an Italian priest and phenomenological theologian, would call the religious sense, and what Tolkien gets at with the glimmering star:

but, like Waugh's Sebastian, he doesn't immediately respond to it:

But it's money to get, bitches to hit, yah
Zeroes to flip, temptation is, yah
First on my list, I can't resist, yah

Kenny is burdened by the knowledge of God, by begrudging belief in Him. Yet, for him, God- by His Hebrew name, Yahweh- remains in the background, twitching upon the thread: