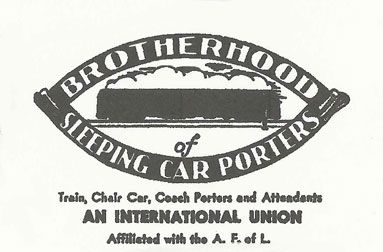 I was reading the Wikipedia entry for the Brotherhood of Sleeping Car Porters, which was the first Black union to integrate the American Federation of Labor. In the wake of the Civil War, the Pullman Company an opportunity to cut costs by hiring Black laborers who were desperate for good paying work. The circumstances of employment on Pullman cars was rough, and workers for the company faced an uphill battle to achieve economic stability, between extensive hours, a glut of unpaid "preparatory" work, and low wages.

In order to improve their conditions, the Pullman workers organized, and A. Philip Randolph became the leader of the newly born Brotherhood, under the motto: "Fight or Be Slaves." Under his leadership, the BSCP was organized and Randolph worked to gain membership of the BSCP in the A.F.L., which to that point was strictly segregated. This action was one of the precipitating events of the Civil Rights Movement, which would grow from these early beginnings through the following decades. During most of this time, the BSCP collectively bargained for its members, them and others opening the door for the Black middle class of the 50s and 60s.

Unfortunately, the logo of the BSCP can only be found online in a terribly low-res version. This logo was prominently featured on, for example, the BSCP membership cards:

Since it was not available, I decided to make a vectorized digital version:

As long as the rightsholders to the original image agree to do so, I hope to post it shortly to Wikimedia Commons and put it on the top of the Brotherhood's Wikipedia page.